“NGL – what a strange term! What is that supposed to mean?” These thoughts might pop up in your mind the moment you see or read that term. It is totally fine if you do not know the definition of “NGL” because today’s world is changing so fast and information is continuously updated. In this article, we will provide you with NGL’s meaning, origin, and even real-life examples to help you understand and be able to use this term effectively in daily conversations.

What is the definition of “NGL”?

“NGL” is the short form of “Not going to lie” or just simply “Not gonna lie”.

According to Macmillan dictionary, NGL – not gonna lie is used frequently on the Internet for saying that you are going to admit something that makes you feel a bit uncomfortable or awkward. Usually, people do not say the NGL in speeches, instead, people would say the whole phrase “Not gonna lie“. The most common slang people usually use to replace NGL is TBH which stands for “To be honest”. Sometimes, people even combine these two phrases into one new slang “NGLTBH” – “Not gonna lie, to be honest“. Where does “NGL” come from?

The expression “not gonna lie”  has been around for over 100 years. It is often presented as an empty colloquial expression, but it is always used to imply honesty or vulnerability. In other words, people often say “I’m not gonna lie” before and after insightful, overwhelming, or non-vulnerable opinions.

“Not gonna lie” seems to have become NGL in 2009 or 2010. This was when the abbreviation was first added to the Urban Dictionary, around which time the word began to gain momentum on the Internet. Google Trends. 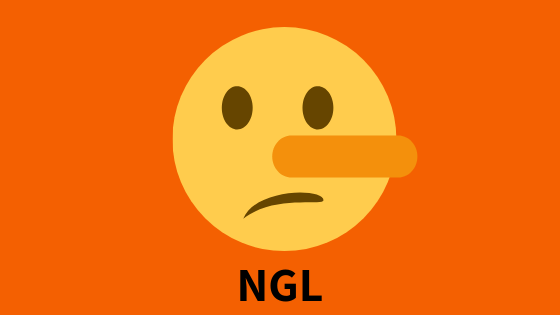 Example 1: In this conversation, A tells B that the color of  the shirt B is going to take is a wrong choice, and advise B to choose another color.

Example 2: In this conversation, Speaker 1 thinks Jannie’s new pants make her look older than her real age, while Speaker 2 thinks they are great pants for big beautiful woman like Jannie.