BTW: What is the definition of this term? How to use it effectively?

The acronym “BTW” is widely used online. If you’ve seen this acronym used and are wondering what it means, this article is for you. There is information about the meaning of this term and other meanings that may be derived from this acronym. You can also see sample conversations that will help you better understand the terms used in a particular context. 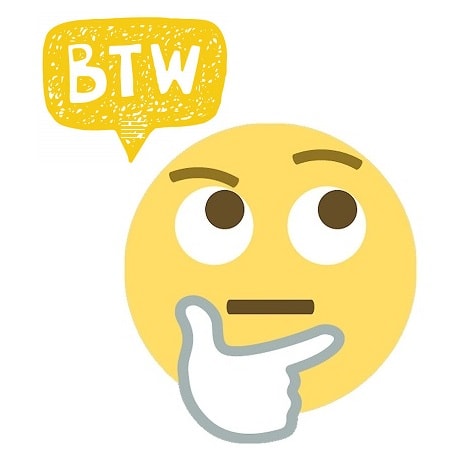 What does BTW stand for?

BTW is the short form of “by the way”. This phrase is useful for everyday conversation and the transition from one topic to another. It can be used to send text messages, emails, and chats over the Internet in the same way you would use “by the way” when communicating face-to-face.

This phrase is so common that it can be used by almost anyone in almost any type of conversation. Specifically, it is used when someone changes the topic of the conversation or provides new information. Since this is text messaging lingo, it is preferred by younger people instead of older people.

Where does “BTW” come from?

There is no exact information about the origin of “BTW”. However, it is known that this Internet abbreviation has been in use since 1989. “BTW” is widely known to mean “by the way“, but some people think it can mean something else. Some use it to mean “back to work” through workplace communication and email. This indicates that the person is taking a short break and continuing to be in charge.

A list of other things that the abbreviation BTW can stand for:

Friend A: Hey, will you come to the party at Brad’s house this weekend?

Friend B: Nah. I got something to do on that day. Btw, I do not like him very much.

Friend B: I think he’s too arrogant and show-off.

(In this example, Friend A is asking Friend B whether he/she will come to a party or not. Friend B declined the invitation and added an extra piece of information that he/she did not like the owner of the party. Here, “BTW” is used as a clever way to transfer from the idea of going to the party to the opinion about a person.)

A conversation between two colleagues

Colleague 2: Not so bad. I’m quite snowed under with work, though. I think I don’t have weekends anymore.

Colleague 1: That’s too bad. Btw, do you have Mary’s phone number?

Colleague 1: Nothing serious. I want to ask her on a date.

(In this example, Colleague 1 was asking Colleague 2 about his day. However, that’s just a friendly way to start the conversation. What he really wanted to know was the phone number of Mary. Here, he used “BTW” to direct the conversation to the real topic that he wanted to talk about.)