Tight A.s.s: What is its definition and how to use it effectively in daily conversation? Meaning of Tight A.s.s: What is its definition?

Idioms are groups of words organized to give completely different meanings to each word. The phrase “Tight A.s.s” is actually a common idiom used in everyday conversation.

This idiom has two meanings. The meaning used is implicit in the context in which the expression is used.

“Anna is always making excuses not to have parties at her house. She thinks it’ll be messed up. What a tight ass!” (means “Anna is so boring/not fun”)

“Harry is such a tight ass. He has a job, a house, and car, yet he never eats out.” (means “Harry is so reluctant to spend money”)

Tight A.s.s: Where does it come from?

The expression “tight ass” first appeared in Philip Roth’s novel “Portnoy’s Complaint” in 1969. When the term began to be used, it was referring to women who were not having sex. The term was included in the Slag Dictionary in 1903, and over the years it has taken on its meaning today.

“Tight A.s.s” can also mean someone who scrutinizes and processes the thoughts and opinions of others, or someone who looks at the world in a very ironic way.

You may hear the word “Tight A.s.s” used in various conversations in English. Now let’s take a look at some examples to show what you can hear.

A statement was published in a local newspaper when the candidate was asked what he thought of colleagues in the city who had applied for similar positions.

“He’s probably a good choice as the town financial chief. He’s got a really tight ass. But I still think I stand a better chance.”

(Clearly, this person did not like his opponent, claiming he was a person tight with money.) 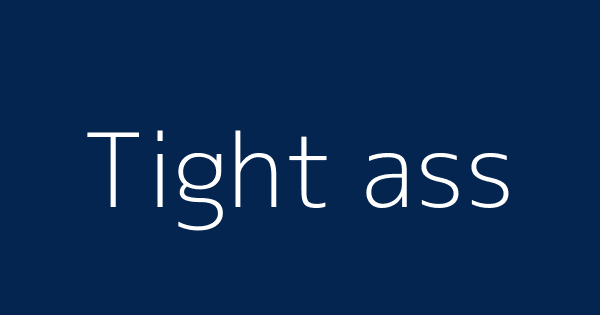 Two colleagues were having a conversation

Colleague A: To be honest, I was shocked when Adam invited us out for lunch today. He used to bring lunchbox every day for 5 years.

Colleague B: Yeah, I know. I felt that way, too.

Colleague A: Did anything happened to him? Where has that old tight ass gone?

Colleague B: No idea. Maybe he just decided it’s time to enjoy life.

(In this example between two colleagues, they were actually talking about another co-worker named Adam. Adam was a person who did not like spending money on eating out, so they were both surprised when he suddenly changed his habit.)

A conversation between two friends

Friend 1: Hey, have you seen Ginny?

Friend 2: No. Are you looking for her?

Friend 1: Yes. Actually I want to invite her to my friend’s party this Saturday night.

Friend 2: I don’t think she’ll ever agree to that.

Friend 2: She is just not into having fun, a real tight ass who is never going out at night you know.

(In this example, one friend was going to invite a girl out to a party, but this plan was disapproved by another. The reason provided was that the girl did not like going out on such events and she was kind of an inhibited person.)

“Don’t invite that tight ass to our party again”

“I didn’t know Mary was such a tight ass. Yesterday, she left at 7 p.m, saying it was getting dark and dangerous!”

“Danny was such a tight ass sometimes”

Another way to say the slang “Tight A.s.s”

There is no other way to use this idiom or slang term.

Related idioms to the term

There are several other expressions which can be used instead of “tight ass” to mean the same thing. However, it depends on the context for you to choose the right substitute for that “tight ass” has more than one meaning.